Sharp pain then exquisite pleasure unlike anything he’d every imagined. Teeth sinking into his neck, the idea so repulsive, as to make him jerk away, but he welcomed her fangs, her lips her mind on his mind, her heart on his… her cold unbeating heart on his going so fast he thought it would burst out of his chest.

Then he woke in a cold sweat.

“I have a date with a Vampire,” he said aloud as he stared up at the ceiling in his bedroom. The clock said 2:49 am. She’d be wide awake. Their date was for 8:00 pm the next evening, at dusk. Maybe he’d surprise her and show up early.

Then again surprising a vampire wasn’t always a good idea. As a Vampire Hunter Austin had learned how temperamental and jumpy the creatures could get.

With his gun in a holster under his jacket and a knife strapped to his leg he drove to the house of the vampire. She was his vampire. He smiled at the thought.

Elizabeth wasn’t like the musty creepy creatures he found in the basements and attics of the old buildings he restored. She was alive and living in the real world – his world. Smart, stylish and successful is how he’d describe her – almost charming and quaint in her quiet way. Yes, there was still that sense of unease knowing she was a predator and he was the hunter. Either one of them could become prey at any moment but he doubted that would happen. Well, sort of doubted in a wishful thinking sort of way.

It could turn into a love affair, a science experiment or a fight to the death. He was up for any of the three options but as hoping for the first. He’d never been involved with a Vampire in any sort of social situation, much less having one in his bed. What a rush. No matter what happened he’d make sure he was on top of and in full control.

He stood in front of the arts and crafts house knowing she was inside. Her car, an unassuming Ford Fusion was in the driveway. A faint light came through the living room curtains. Sure she could see in the dark but the soft glow of artificial light was always welcome.

The front door opened. She stood in shorts and a sweater. An average girl. That is if an average girl was around 180 years old.

“Austin, what are you doing here?”

“You could smell me couldn’t you.”

“I sensed you were out here. You should be in bed.”

Then he snapped out of his brain fart fantasy and continued to look at her front door wondering what she was doing inside. A light came on in another room. He could see her with another woman and a man. He recognized both as Vampires. No dark shadowy creatures were here. They were the hippest of the hip. Modern Vampires who had no intention of sleeping in basements or lurking around in shadows.

Walking back down the block to his car Austin thought about the weirdness of it all. He was sure they despised the Vampires he exterminated as much as he did.

There was something about Elizabeth that was so human and alive. He remembered her cold hands and lips then thought of how hot she was. He thought about how afraid she was of him, but then again how… no, just don’t even go there tonight. In a few hours the sun would come up, then the dusk would come again and he’d put on a suit and pick her up for their first official date. 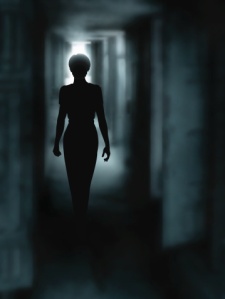 For the first part of this story of Austin and Elizabeth click here for The Hunter.

8 thoughts on “Dark Dreams of the Hunted”