Ian Rutledge has returned from WW1 and is back to his job as an inspector with Scotland Yard. The woman he loves has left him. The ghost, only he can see of Corporal Hamish MacLeod is in his head, or riding in the back seat of his car. The war is over but violent death is still part of his life. His sister Francis is always there for him and always a delight.

I love these books. Right now I’m reading “A Pale Horse” which takes place in 1920. The characters are alive and believable. The story lines are captivating. If you’re looking for a new series (especially fans of Nigel the Ghost) you’ll love these books.

The author is a mother/son team. They do a magnificent job.

The first Book in the series is A Test of Wills : Ian Rutledge, returned home from the trenches of the Great War, loses his fiancée Jean after long months in hospital with what is now called PTSD, and faces a bleak future. Fighting back from the edge of madness, he returns to his career at Scotland Yard. But Chief Superintendent Bowles is determined to break him. And so Rutledge finds himself in Warwickshire where the only witness to the murder of Colonel Harris is a drunken ex-soldier suffering from shell shock Rutledge is fighting his own battles with the voice of Corporal Hamish MacLeod in his head, survivor’s guilt after the bloody 1916 Battle of the Somme. The question is, will he win this test of wills with Hamish—or is the shell shocked witness a mirror of what he’ll become if he fails to keep his madness at bay? 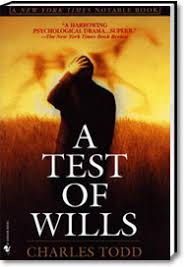 For more information go to: https://charlestodd.com/the-history-of-inspector-ian-rutledge/