Our friend Pierce was by this weekend. He pulled out a tintype of his mother and sisters.

“Great, you should get in touch with her. She is in the Oakland Hills these days. She’d love to see you,” said Pierce. 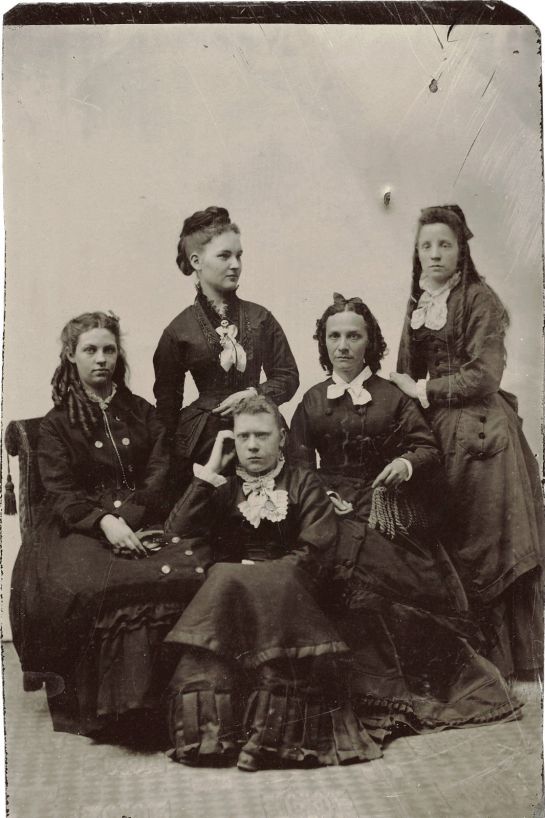 Evie is on the far left, with the long ringlets looking straight into the camera.

They were a lovely family of assorted interesting personalities. Evie has a fire about her, and a curiosity, and sense of humor that kept everyone who knew her entertained, and on their toes. Despite the fact that she had more than her share of suitors she took a different path.

I don’t know exactly when she approached my brother Aaron and told him that she knew what he was (what we all were.) She wanted to be like us.

Years later we were walking on a beach, it was I think 1932. We were wearing satin evening dresses with absolutely nothing on under them. My hair was in Marcel waves. Hers was pulled back in an elegant chignon with a diamond clip.

We were talking about everyone at the party we’d just been at. It was a warm night on the Central California coast, as we walked barefoot, our stomachs happy and full of blood and booze.

Then she stood and faced the waves. She dropped her dress on the sand and ran laughing into the waves. I didn’t see her for days after that. I’ve no idea if she had taken a night swim then run off with a lover, or if she’d hitched a ride on a whale and gone off to Mexico. I have no idea at all.

But that was typical of Evie.

It was good seeing the old tintype. I’ll have to give her a call – and soon.

Just a reminder for all of us to call old friends, and rekindle old relationships. It will be just like being alive again.