I first experienced Suspect by Robert Crais as an audio book. My husband is reading it now, and I plan to read it again when he is finished.

Most of us know Crais from his Elvis Cole and Joe Pike series. This is a stand alone book with an entirely new cast of characters.

Below is the description from the the Robert Crais web site:

LAPD cop Scott James is not doing so well. Eight months ago, a shocking nighttime assault by unidentified men killed his partner Stephanie, nearly killed him, and left him enraged, ashamed, and ready to explode. He is unfit for duty—until he meets his new partner.

Maggie is not doing so well, either. A German shepherd who survived three tours in Iraq and Afghanistan sniffing explosives before losing her handler to an IED, her PTSD is as bad as Scott’s.

They are each other’s last chance. Shunned and shunted to the side, they set out to investigate the one case that no one wants them to touch: the identity of the men who murdered Stephanie. What they begin to find is nothing like what Scott has been told, and the journey will take them both through the darkest moments of their own personal hells. Whether they will make it out again, no one can say.

The fact that I’m diving into Suspect for a second time says how good it is. Robert Crais gets into the soul of Maggie the dog. It isn’t always easy. It isn’t always feel good. Read the book. You’ll be moved.

For more about Robert Crais go to: http://www.robertcrais.com/books/book_suspect.htm

I love this book.
Buy or borrow Suspect and look at the photos below of my German Shepard Alice. 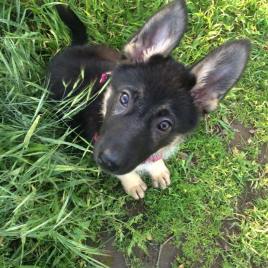 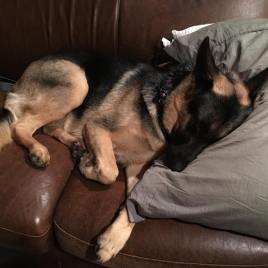