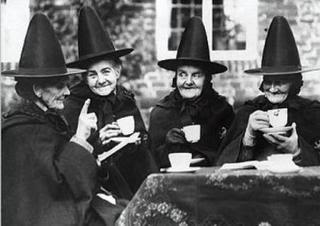 “It is called Tag Hash. You add stuff as you go, as in tagging it on to the end,” explained the ancient Vampire Tellias. “I learned to cook in Rome, when I was a much younger Vampire than I am today. Tiberius was emperor at the time. God, that was a strange time. Fun if you were on the top of the food chain like I was. They thought I was a demigod. Oh, I had my share of torrid adventures. Nothing I’d recommend either one of you try, but it was fun.”

Tellias pulled out a large cast iron skillet then rooted around his kitchen for various knives and bits of food. Vampires don’t eat a lot of regular food but we do, from time to time. One can’t live on blood alone.

With his white blonde hair pulled back in a ponytail, wearing a red apron over a tuxedo shirt with a thousand little tucks and blue plaid pants he was quite the dashing cook. He looks all of 19 years old but Tellias is as ancient as modern civilization and much more civilized. My 15 year old daughter Clara and I were visiting and chatting and having a lovely time in large Victorian kitchen.

Tellias talked as he cooked. “We made Tag Hash back then too. I believe I’ve had this made with everything from chopped mouse to wolf to mussels. Once a group of superstitious soldiers even added the body parts of slain heroes. A bit of human heart or liver that made the soldiers feel special. It wasn’t very good, in fact it was horrible and a bit disturbing, but they thought they were stronger after eating it. Anyway, people used to do all sorts of nasty things. They still do. So, where was I? Tag Hash. Ingredients come and go with fashion but everyone likes to add bits and pieces together and think they have something special. Sort of like a romance – all bits and pieces.”

He took a few mushrooms and chopped them up, then grated a carrot and a few squash he’d picked that morning. After that he added finely slivered onion and shallots to the mix and a bright red bell pepper. He chopped a small mountain of spinach and Swiss chard together. Throwing in a bit of thyme, salt and pepper he mixed everything in a bowl with a hand full of chopped oysters, some raw steak thinly sliced steak and a slash of white wine.

Next he took out some thick smoky bacon and cut about 8 pieces into small bits and threw them in the cast iron skillet to fry. He said he never cooked the pieces whole. It was easier this way and much more fun.

Throwing a bit of olive oil and a hint of grape seed oil in the pan he added the chopped ingredients and flattened them out.

“One must wait a bit to make sure everything browns.” He said with a sly smile, and then flipped the crispy hash over. Then he cracked a few eggs on the top and left them to cook.

When it was brown on both sides and the whites of the eggs had cooked, he moved it to three plates and we proceeded to the table. He sprinkled a bit of chopped tomato and green onion on top for color and a little zest. The vegetables were tasty, the oysters were done to perfection and the steak was rare.

The dish was served with Bloody Marys (made with real blood of course), and Clara had some spiced Poet’s Blood.

It is a dish that is served different every time because it is Tag Hash – just tag things onto it until you get it like you want.

“I like to fix this around Halloween.” continued Tellias. “I add pumpkin and winter squash with a bit of sweet potato. It adds a delicate sweetness without processed sugar. If I was a Witch I’d add small children, monkey balls and bat eyes, but I’m not a Witch. Luckily none of us are Witches or Warlocks. You have to watch out for them. Always question what they’re cooking, or better yet don’t dine with them at all.”

Long long ago his wife had been involved with a couple of Warlocks so Tellias never trusted any kind of Witch. Come to think of it none of us really trust them or like to spend much time with them. They’re as creepy as Ghosts as far as I’m concerned and far weirder and one can never trust a Witch. Never.

We didn’t have any left over Tag Hash but we had some left over hash tags: #taghash, #hashtag, #vampirecooks, #vampiremaman, #modernvampires, #Tellias, #ancientvampires. I’m not sure what to do with them but we’ll figure it out before they go bad.

I’m moving children off to college this weekend so…. this was originally posted in 2014. Enjoy and eat your hash.