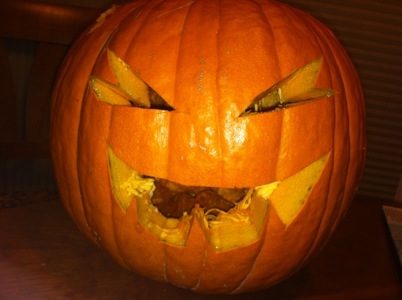 I stopped by the home of the Ancient Vampires Tellias and Eleora. They are dear to me beyond anything I could ever describe. Today I brought some Pumpkin Spice Blood, and some of their friend Druce’s famous nut cakes.

Tellias and Eleora look like they are only nineteen or twenty years old, but they are over two thousand years old. Nobody really knows how old Eleroa is.

Tellias was on the porch wearing overalls with no shirt. His pale blonde hair was pulled back with a piece of red string. Eleora was wearing a red flowers dress with a pink and yellow striped cardigan that must have been from the 80’s due to the shoulder pads. They were carving Jack-O-Lanterns.

“Juliette, do you know the story of Jack-O-Lantern and why we carve pumpkins, turnips and other vegetables each year at Halloween time?”

“Please tell me why we have Jack-O-Lanterns,” I said.

Tellias started to tell the tale. “There was a man named Jack.”

“Did I know him? Was it that one who became a priest?” Asked Eleora.

“No, dear Eleora it wasn’t that Jack. He became a priest and a Werewolf, but that isn’t the story I’m telling today. This Jack of my story lived in Ireland around the time that St. Patrick brought his god to the island.

Jack was a man who like to drink, make too many bad jokes, seduce women, and gamble.

One day he was playing cards in the woods with some of his buddies. But his buddies were frightened that the Demons in the woods would grab their souls so they left running after Jack won the game, and all of their money.

Jack yelled into the woods, “Do you think you can beat me Demons? Show yourself if you’re there.”

Three Demons came out of the woods. Two were males with curved horns and tall leathery wings. The third was a woman who, despite her pointed teeth and spiked tail,  was beautiful beyond anything Jack had ever seen.

Jack won all of the gold off of the two male Demons, but he could not win from the female. She laughed at him. This made Jack angry but he had a plan. He gave the Demons wine that he’d laced with poison. When the female fell asleep he took all of her money, her clothing, then burned a cross into her chest. He was going to take more from her but the male Demons woke and chased Jack through the woods. Jack was too fast for them and got away with the gold, laughing all the way.

What Jack didn’t know was that the female Demon was the Devil’s own favorite. When she returned back to Hell the Devil could no longer touch her because of the cross burned into her chest.

A few months later Jack was at home with his wife. The poor woman had just given birth to their ninth child a few days before. Jack was tired of the noise of crying babies and screaming children. He was tired of his wife always with a child at her chest, and his dinner being late. He looked over at the new child and noticed how beautiful she was. Grabbing the new baby away from his wife he told her he was going to show the child off to his friends at the pub.

Only Jack didn’t go to the pub. He took the child to the wife of nobleman who’d recently lost her own baby and was sick with grief. Jack told the woman to let him have his way with her, and give her 20 pieces of gold and the child would be hers. Her husband had been away for several weeks and was due to return home soon. He would never know the child was not his. Before he left with his gold he told her that he’d come back each and every week to roll in her bed with her, or else he’d tell her husband that she’d killed his ugly child and replaced it with a prettier one.

Jack laughed all the way home, or at least that is what he planned on.

He was attached by wolves who tore he heart out and left his body for others to find. Jack’s heart was so foul and so rank that the wolves spit it out and left it next to Jack’s body.

Jack’s wife got the gold pieces, and everyone assumed the wolf had eaten her baby. She mourned her child but not her husband Jack. Jack’s children were only happy to soon forgot about him, and all memories of Jack were forever lost. Eventually she met a good man who treated her with respect.

Jack went up to heaven. St. Peter took one look at him and told him that there was no place for him among those who spent their lives being good to others.

So Jack went down to Hell. He figured it wouldn’t be that bad. He could play cards by the fire and cheat the Demons out of their favors. Jack was in for a surprise when he got to the Gates of Hell.

The Devil told him that he didn’t want him, and recited a long list of pranks Jack had play upon the Demon’s of Hell. Suddenly Jack, who always had a party, a pub, or a pretty girl to go to had no place to go.

The female Demon who’d had the cross burned into her chest threw Jack a large turnip and a candle. The turnip had been carved into a face with a grin full of broken teeth that mocked Jack.

Jack was made to wander the Earth forever with his Jack-O-Lantern, never able to rest, except on Halloween night. But if Jack stops at a place and finds another vegetable l carved with a face on it  Jack is not allowed to stay.”

“Is he still wandering the Earth with his Jack-O-Lantern?” I asked.

Tellias smiled at me with just a hint of his Vampire fangs. “On windy nights you can hear howling and banging on the windows. Sometimes that isn’t the wind. It is Jack trying to get into a nice warm house and sit by the fire with a pint of beer. It will never happen. The wind takes Jack off again to the next storm, throwing him around the globe, with his heinous grinning turnip lamp.”

And there, from Tellias, Eleora, and me is the story of Jack-O-Lantern.