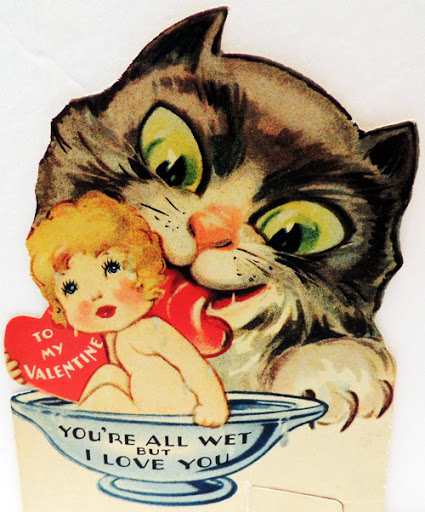 “I shouldn’t be alone today,” thought young Randy as he sat brooding on a rock, on the beach at 5:30 a.m. on Valentine’s Day. His heart was broken. The girl, a Vampire girl he knew he was going to fall in love with had given her heart to another and left him in the dreaded friend zone.

And it wasn’t as if she’d left him, or chosen another college student. Sure the guy she’d fallen for looked like he was twenty-one but he was born in freaking 1902. What did girls see in these older guys?

He was jolted from his thoughts by a “Hi. You’re Randy, aren’t you?”

A dark haired girl stood in front of him. “I’m Alexis. I’m in your Organic Chemistry class. I’m a Vampire, but you knew that. I know you are too. Small world.”

She sat down on rock next to him. “My parents were borderline Shadow Creepers, you know old time Vampires who stayed in the dark most of the time. Nobody knew we were Vampires but everybody including the other school parents thought my parents were weird. I got picked on a lot at school. I was like quiet and small. I didn’t know how to stand up for myself. I didn’t dare try any of my Vampire stuff on anyone. I was afraid if anyone found out they’d kill my family.  Anyway, every Valentine’s Day we’d have to make stupid boxes and bring Valentines. I always made something pretty with roses and flowers and stuff, all pink and nice. I always But I never got any Valentines. Maybe from one of the girls who felt sorry for me. Everyone had full boxes except me. The kids all started to laugh at me. I wanted to rip their throats out but I couldn’t. You know, Vampire code.”

“Sure, don’t show them what you are, no matter what. Did your mom and dad know?”

“I never told them anything. We didn’t talk much at home. But I got my revenge.”

“I told the teacher I had to go the bathroom. Of course the boys started to make jokes about how I’d stink the school up. They were mean like that. Always. It never stopped. So like the teacher said someone had to go with me to make sure I wouldn’t spend too much time in there, cause sometimes I’d just go there to get away from it all. She said that Ashley should go with me. Ashley was the most popular girl.

She started to pout and complain. So a girl called Emma volunteered. Emma was the only kid who gave me a Valentine. She was kind of overweight and sometimes the other kids would say mean things to her too, but she was the smartest kid in the class so they didn’t say too much.

When we got out of the classroom she said she knew I didn’t need to go to the bathroom. We walked around for a bit, then went back to the classroom. But we didn’t go in.

“You can make them pay for what they did. I’ll help you,” said Emma. “I’m a Witch. I know what you are.” Then she smiled in a way that even scared me.

We didn’t go in. The door locked. The room filled with smoke. The other kids started to scream. They couldn’t get out. Everyone started to claw at their faces and arms. That is except the teacher who kept trying to open the door. We ran to the office to get help. You know, we had to keep up appearances.

By the time the fire department go there and knocked down the door, the smoke at gone away, but the smell of sulphur was still in the room. Some of the kids had clawed out their eyes and made huge gashes in their faces and arms.

Then Emma whispered in my ear, “they’ll never call you ugly again.”

Hey, even I was shocked. I never did a thing. It was all her. Both of us ended up going to another school. In high school I made a lot of friends. They all thought my parents were cool Goths. The rest of the kids are still all scarred and screwed up.”

Randy looked at her feeling sort of numb. “Where is Emma now?”

“She got into swimming. Lost a lot of weight. Turned blonde. She’s at UCLA now. So Randy, why don’t you like Valentine’s day?”

“A girl I liked started seeing another guy.”

“Bummer. Sorry to hear that.”

They sat in silence for a while, listening to the waves. Randy didn’t know what to say. He and his best friend had been the two most popular boys at their high school. Their lives had been happy and relatively care free. Their parents were modern Vampire in every way possible.

“Looks like the storm is coming in. Wanna get coffee? No pressure. It’s not like I want to be your girlfriend or anything like that. Just you know, like just a couple of Vampire friends.”

As they walked up to the street he put on his sunglasses against the morning sun. Well, stranger things had happened.