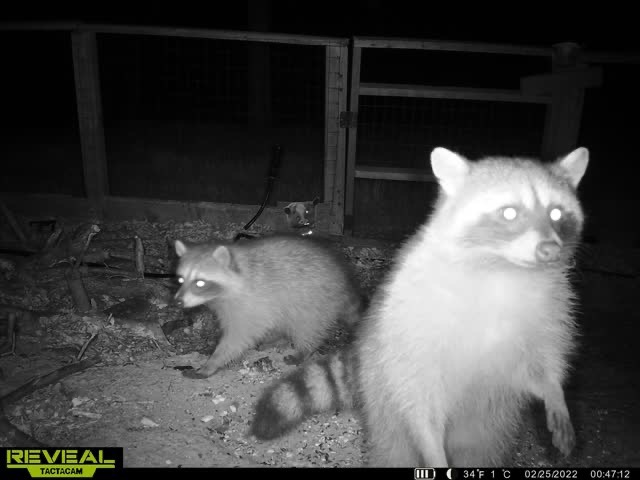 When people think of the dead of night their thoughts often go to less than savory things, but my thoughts go to absolute cuteness. Yes, the night is full of dangerous things but it is also full of cuteness. Absolute wonderful cuteness!

Despite my well known better than average night vision, my husband got me a night time critter cam. These cameras are often marketed to hunters, but I just want to see who is out in my back yard at night and don’t want to scare them off. It also shows me if a skunk is out back for when we take the dog out for her before bedtime potty time.

But enough of that. You want to see photos, and did I ever get some curious and entertaining photos.

The last image is so unexpected I nearly lost it. The North American Mini Bison hasn’t been seen in the vicinity of humans since the Ice Ages. Could it be that they’ve been hiding out for eons just waiting for someone to put out the right kind of apple chunks?

Rick and Marty have been digging on Oak Island forever and found nothing. Sasquatch hunters have yet to really find a live Sasquatch (I’ve seen one but that is another story for another day). We’ve yet to have real proof of a UFO and real aliens from other planets. But I have a photo of a creature who was said to have died out 11,000 years ago.

The North American Mini Bison was a small creature, no more than 3 feet in length, who walked on extremely short legs. While the Mini Bison thought it was going fast, it wasn’t. It was often prey for larger animals and humans. It was thought to have tasted sweet like a nice yellow cake with chocolate icing. Yes, yellow cake. No kidding. I read it on Critterpedia.

I’ve put in a call to a friend at the local University to see if he can get me in contact with someone from the Animal Science Department or the Vet School to see if we can find out more. I keep thinking I should call Fish and Wildlife but I don’t want anyone coming out to trap the Mini Bison or scare it off. I also don’t want anyone else hunting around for it. For now I just want it to be left alone.

Oh my goodness, wouldn’t it be adorable to have an entire heard of these things living behind my house!!!!!!

I’ll keep you posted on my finding on the North American Mini Bison. In the meantime enjoy these shots of the raccoons, skunk, the foxes, some turkeys, a squirrel, and my dog.

This post is my 2022 entry for the Evil Squirrel’s Nest Contest of Whatever.