Well, now that the entire world is going to Hell in a hand basket there is no sense even bothering to blog anymore. I’ll just sit around and feel bad for future generations, that is, if there are future generations.

Alright, now that I have everyone in a good mood…

What are we taking about today?

School sucks. I thought this year had started out ok. Now the 15 year old is into her third week of school she thinks it is a big waste of time. I kind of have to sort of agree from how she describes the classes. A lot of it is the other students and their lack of interest. The good news is that according to my daughter most of the kids at her school would be safe from a zombie attack due the absence of brains.

She said she wasn’t learning anything. Then she went on for almost 90 minutes about Greek philosophers, Spanish language use of formal vs. informal, and all about kids she was meeting.

There is a boy from the Ukraine who is here as an exchange student, living with a cousin. He loves it here but is worried about his parents who are quite politically active. He told the other kids (15 year olds) about tanks driving through his town. They were all pissed off because the one pizza place in town was destroyed. That wasn’t the biggest concern but… sometimes it is easier to find something to make light of when the situation is grim. I’m glad the boy is here and that he has so many students and new friends to rally around him.

I’ve finally replaced my “not so smart phone” with a phone that works. So now I can check your comments to my blog on my phone. I’m happy.

Despite the news, good things are happening every single day.

The eldest, not yet off to college, is in that strange place between boyhood and manhood. It makes me smile to see him painting or playing his guitar. He has always been the one who has been quick to smile and easy going. He’ll do great no matter what he’ll end up doing. I worry about him getting his heart broken, but he will and no doubt it will be good for him in the long run. If not, he’ll get over it.

He will soon be on his own but he has a strong support system. We talk a lot about it. No specifics, just general stuff. It is all good at this point. I just hope that in October I don’t start getting reports of “I hate college.” In fact I’m thinking that maybe the younger one should just skip high school and go directly to the University. OK maybe not.

As for life in the shadows…

Cody and Lola stopped by last night. We haven’t seen him for a while. Cody, as you might recall, has only been a Vampire for a few years. He comes from the high tech industries of the Silicone Valley. He was a young hip guy who unrepentantly became a Vampire (sounds simple but it wasn’t and isn’t, long story.)

Somehow this unlikely couple makes it work. My eldest brother Max is totally against it and freaked out. I told him he was being a jerk, but as the youngest in the family he never listens to me. I also have called him a sexist pig from time to time but that falls on deaf ears (usually.) It might just be that he is over protective of Lola, but it is more that he was Lola’s favorite little baby boy and now she is in love, real love and Max can’t handle it. Asshole.

Yes, we all have siblings who drive us crazy. If not siblings some other family member will step up for the job.

Well, so much for family drama.

I’ve been thinking a lot about Halloween, Thanksgiving and Christmas. This year I want to go all out with decorations and entertaining. We shall see… I will keep you posted. At least the festivities on this blog will be BIG.

Yes, the world is going to Hell in a hand basket, but not all of it. Let’s all work hard to keep the good things good.

That’s all for today.

~ Juliette aka Vampire Maman (who is just rambling today but I get to do that occasionally because I’m sort of good at it, kind of.) 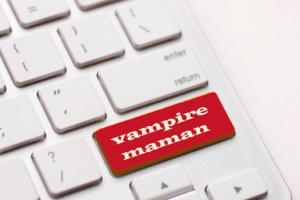 I was all set out to write about how as a busy Vampire mom I never have enough time. Then again I don’t have the self-indulgent luxury of feeling sorry for myself.

A busy friend of mine (a dad) said “If you want something done ask a busy person.”

I have a deadline for some short stories and suddenly writer’s block has hit me like a big block of iron ore right in the side of the head.

Then there are those four novels looming around like ghosts. Two of them 90% done. All are exceptionally good if I may say so myself. My husband doesn’t believe I’ll get them done before my 200th birthday. I need an editor.

And speaking of ghosts…my ghost is gone. I don’t know where the nasty little bastard went. Damn him.

I was going to write a post about either Werewolves, my new Vampire Cody or my business partner and how she handles working with Vampires.  But I didn’t.  I started to and it just turned out stupid.

So instead I’m sharing a photo of the cat. He isn’t a Vampire. Just a cat who is quiet good at being a cat as you can see.  The spell check said I should say “that is quite good at being a cat” but I see him as a WHO not a THAT.  The Grammar police have no power over me today. But back to the cat…he is quite wonderful. 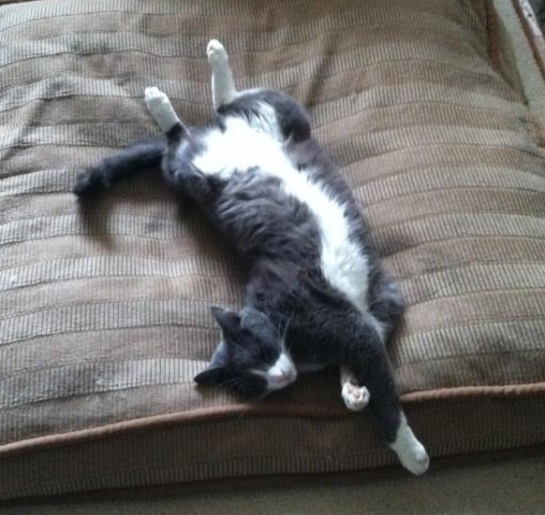 And speaking of grammar:

You may say a cat uses good grammar. Well, a cat does — but you let a cat get excited once; you let a cat get to pulling fur with another cat on a shed, nights, and you’ll hear grammar that will give you the lockjaw. Ignorant people think it’s the noise which fighting cats make that is so aggravating, but it ain’t so; it’s the sickening grammar they use.
– Mark Twain, A Tramp Abroad

And I’m sharing some doodles by my phone, not done on some app, but scribbled with pen and pencil on my desk. I’ve cropped out dates, phone numbers and names. Add to list “Do Serious Artwork.” It is too bad I didn’t turn the California Artist Julian Rix (look him up) into a Vampire when I had a chance. He was a lot of fun. That was back in the late 1870’s. But art…yes, I need to get serious again or … I could just doodle I suppose. 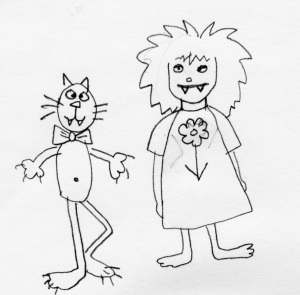 That last doodle is my cat and me.

Like they tell the kids at lunchtime in preschool “You get what you get and you don’t throw a fit.”

And no, my husband will never figure out how my mind works and he gave up a long long time ago. He doesn’t read this blog either, but I’m fine with that. If you blog don’t expect your partner to read it. That is usually a good thing.

So anyway, have a Vampire sort of day – you know, happy and Gothic and all full of fun and bats and cocktails and passion and stuff like that.  Add to list: Passion. Call Teddy.