In light of today’s shooting at the Capital Gazette newspaper in Annapolis, Md we need to all watch and speak out for writers, editors, and journalists everywhere.

In a Facebook post Hiassen’s brother Carl, a renown novelist, described Robert as “one of the most gentle and funny people I’ve ever known.”

Journalists, nonfiction writers, bloggers, or writers of fiction have long been targets. Jails around the world are full of bloggers and journalists sent there for speaking out on subjects we would consider no big deal. Writers of fiction and nonfiction have long been threatened by extremists. In the US, in France, and in other countries journalists have been targeted by crazy ass insane hateful ignorant people.

In today’s climate of crazy ass madness and blind hate we need to keep our voices loud and support writers all over the world. No writer should live in fear. Not from some crazy ass shooter. Not from their government. Not from stalkers and trolls. We must stand together.

We don’t need useless thoughts and prayers. We need action. We need to speak out for the freedom of thought and speech for everyone on this planet.

I don’t feel like my government will do anything. Thoughts and prayers are useless and will not fix the problem. Ignorance and hate must not be embraced. We can’t ignore anymore shootings. Politicians are useless. It is up to us to figure out a way to CHANGE. I wish I had the answer – help me out.

Note: One of my all time favorite authors John Sandford said this better than I could have. This is his heartbreaking FB post. 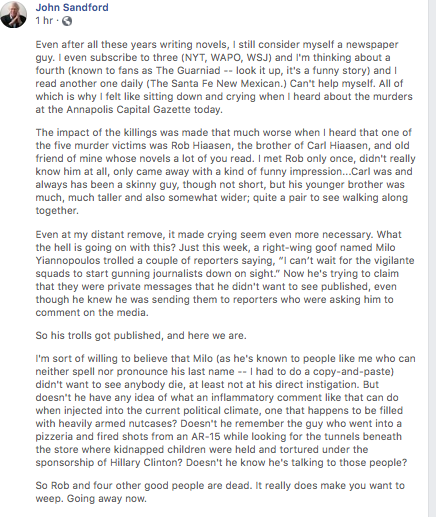