This morning, around 4:00 am I sat at my computer, a cup of coffee. All in the house was silent excel the ticking of the clock on the mantel and my keyboard. I spied a motion at the corner of my eye and saw a slender white hand sticking a finger in my coffee cup.

“Would you like your own cup?” I asked the question of the ghost sitting across from me. Her ashen lips turned red with a small shy smile. “Mary dear, all you have to do is ask,” I told her as I poured another cup of coffee and set it in from of the ghost.

She cupped her translucent hands around the cup and took in a deep breath. This little ghost never tasted coffee when she was alive but she loved it now. Back when she was alive was the early 17th century in London. Like many ghosts Mary was murdered by someone she knew. He was the man she was to be married to. She changed her mind so he brutally killed her. Another man was blamed for the crime and hanged. The innocent man went to Heaven. The murderer ended up in Hell and Mary ended up at my table in California 400 years later.  After all these years the human race is still a vile and violent group of creatures. There is the knowledge and understanding to stop the tragic and stupid behavior but they don’t want to change – at least not enough.

So in the wee hours of the morning a Vampire and a Ghost had coffee and pondered the issues of the day. It was easy for us to judge. We knew the history. They didn’t seem interested. I always wonder why so many people refuse to see where they’ve been. If you know where you’ve been you’ll know where you’re going.

Of course I’d be a complete snot if I said Vampires and Ghosts haven’t had their share of stupid behavior but it can’t compare to Regular Humans. Believe me we have – just read this blog.

Our conversation went back to our men. Her’s is a ghost named Nigel, a man who died in 1986 but acts as if he’d been haunting the world of the living for centuries. Mine is a Vampire named Teddy, who like Nigel, used to be counted among the living men of the world. That said, for centuries women have talked about their men over coffee. It is what we do.

Mary speaks in a quiet musical and odd old accent that most people now living wouldn’t understand. I have the flat California voice, slightly sultry and a little bit soft like Mary’s. We don’t need to be loud. Loud is a trait Vampires and Ghosts will save for Regular people and Werewolves and actors in the theater and politicians and trolls and ministers.

I told Mary some funny jokes that made her giggle. She fades in and out when she laughs. It is really cute, sort of like someone flicking a light switch on and off really fast.

So we sat and chatted until the sun came up. I sipped the rest of my coffee while Mary took in the vapors of her cup. The cats mewed for food, the dog begged to go out and the birds and squirrels started their morning circus in the trees outside. And as the sun came into view Mary vanished back into the night to come.

It is good to have friends who are different. That is a lesson for our children, and a lesson for Humans as well. 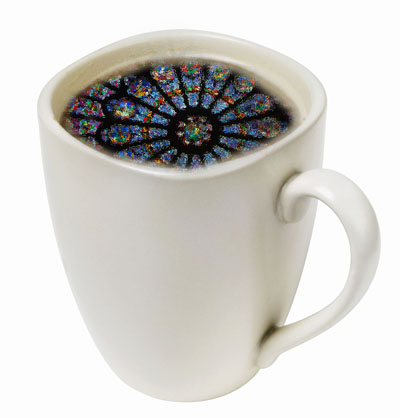 5 thoughts on “Musings Over Coffee with a Ghost”