Cassie sat at the bar with her club soda with a twist of lime. He didn’t show up. Of course not. What was she thinking?

Tim stood by the side of the road next to his smoking car. The car that hit him had rolled over in a ditch. Of course his phone was dead.

Cassie finished her drink as she watched the ball game on the TV. She checked her phone. No messages.

Time looked down the embankment at the other car. “Are you ok?” he yelled.
That sounded kind of stupid. They were probably mangled or dead. He pulled a small flashlight out of his coat pocket and pointed it in the direction of the overturned car. He could see movement. Someone was alive.

Cassie drove home wondering why Tim never showed up. It was probably another woman. Maybe he just didn’t like her. Maybe she wasn’t pretty enough. She pulled over as a fire truck and ambulance flew by with flashing lights and sirens blaring.

Several cars had pulled over to the accident site. When the firemen and paramedics showed up they couldn’t believe what they saw. How would any of them ever explain the scene. Who would believe them?

Just as Cassie drove past the accident site her car slammed forward and her whole body jerked as the sound of crunching metal. She’d been rear ended by a large truck. After they’d pulled over the driver of the truck got out and started to apologize right away. Cassie, feeling shaky and a little numb got out of her car to inspect the damage. “Awww man,” she thought, “looks like it will be totaled.”

Tim sat on the ground next to the injured driver and passenger. He held the woman’s hand as he quietly spoke to her.
“My girlfriend is a pilot. She flies for an airline. She did a little acrobatic work too. You two would have a lot to talk about. You’ll be fine. Just hang on.”

The rescue team looked at what Tim had thought was a car hitting him. It was an airplane. Not just any airplane. This was a classic from the 1930’s. It was pre WW2. Then they saw who Tim had pulled out. Blue sparks flashed across the surface of the wings and propeller. A blue and green glow surrounded the crash site.

Cassie looked at the other wrecked car on the side of the road. The whole backside was crushed. She saw the small painting of the dog on the door. Tim’s niece had painted that for him. It was his dog – a big happy lab mix. She looked down into the gully and saw a plane. A Lockeed Electra 10E. Who has one of those around here, she thought as she started to climb down the bank.

Tim looked up as he heard his name called. It was Cassie. She sat down beside him then looked at the woman holding Tim’s hand. No, it was too much of a coincidence.

Tim brushed the forehead of the injured woman with his hand. “This is Cassie. She is a pilot too.”

The injured woman gave a weak smile then turned to her injured partner. “Fred? Can you hear me Fred? We made it. We’re finally home.” 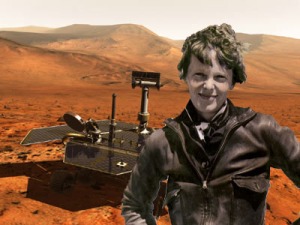