Rex was a small dog of the largest order. He had the courage of a lion, the voice of an opera star and the heart of a lover.

Rex was a real son of a bitch too. He’d stare anyone down. Take on large dogs five times his size with gusto – always being the one to draw the most blood.

Rex’s owner took him everywhere. Rex went to business meetings, poker games, and all manner of business. Where his man went Rex followed tail in the air, head high, quick feet. Rex loved parties where ladies would come in big pretty skirts and scoop him up in their arms and hug him. They’d talk in high baby like voices to him that he liked a lot. It would get him all excited, so much in fact that he wanted to jump and bark. They’d throw him balls and kiss him when he returned.

Later they’d want to kiss his master as well, but it rarely went past a kiss. When it did Rex would stand guard at the door, just in case.

Rex watched for the watchers of the night. These were the people who smelled more like predators than most folks. They were always good to Rex – better than most, but Rex knew to watch. He’d watch them because according to the rules of the dog one has to watch one’s back for larger dogs. The predators weren’t larger but they were more dangerous. But like some of the big dogs, Rex loved them. He saw them protect his master from harm that his master couldn’t see. There were evil forces that only dogs and other predators can see. His master and most people were not predators.

“One can love without complete trust if one is being protected.” Or at least that is what Rex made himself believe.

Rex had been with his master since he was a teen. Now his master was 25. He was a successful man, about to be married, on the edge of greatness. But Rex knew it was time to go to where all good dogs go.

Nights grew colder and fall came. Rex had a hard time walking. He was 14 years old. Not a young dog anymore. Then one night he curled on the foot of his master’s bed and fell asleep forever.

The next night his master, still devastated by the loss of his small and noble companion heard a quiet knock on his door. It tapped out a rhythm not unlike a popular song at the time. He went to the door and there stood a beautiful girl. He knew her. He knew her father and well-respected family. She looked so lovely with her blonde bottle curls and paisley shawl around her milky white shoulders. She wore a ball gown of pink and cream. What was she doing there?

He told her she needed to leave, it wasn’t proper for a girl of her age, and standing,  to be out alone at a man’s house,  but she talked her way in. The man should have lived a long life and joined his faithful dog Rex in Heaven. Instead he discovered the girl, and the two friends who had come with her were predators – some of the very ones who had fed Rex treats and thrown him balls.

Rex’s Master, to this day says that night he went to Hell. Dragged down by rogue Vampires. Rex would have warned him, or at least he thought.

He has had many dogs since then, but he’ll always remember Rex, the dog with more charm and spunk than 100 dogs put together. 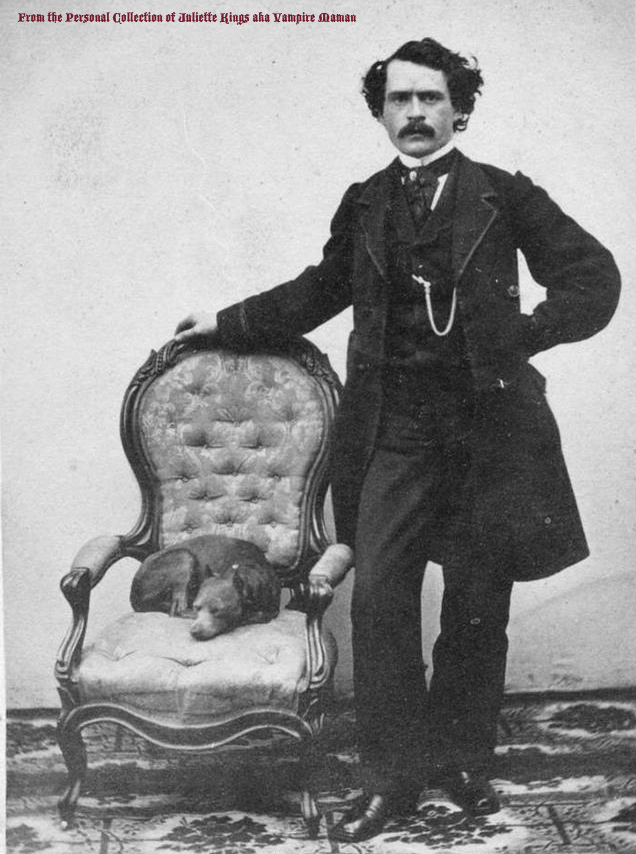 That has been a favorite story for the Vampire kids for a long time. For Rex went away and the next day was Halloween night, the night his master unwillingly became a Vampire.

My kids have often sadly commented that we can’t turn our dogs into vampires so that they can be with us longer.

Note: A dog turned into a vampire would not be a Werewolf Dog. We all know that. Werewolves and their dogs are an entirely different matter.