I was sitting (and still am) at my dining room table with my laptop and overheard my husband on the phone.

“This is Theodore Kings…yes, it’s me Teddy….well I suppose, but no I’m not dead…I haven’t been dead for a long time. Where’d you hear I was dead?….Really?…I married Juliette…Yes, that Juliette… You and Juliette? My wife? Really. No I didn’t know… I wanted to ask you about…”

From there is was all business. I hadn’t thought about him for years. I hadn’t talked to him for at least eighty years if not longer. We’d spent a year on and off, more on, traveling around Europe and ended up in New England. Then we just sort of drifted apart and pst touch, as Vampires tend to do. I had no idea that Teddy knew him.

Anyway, what was I writing about? Huh.

Oh right, we were looking at vacation spots and thinking of either Iceland or Bermuda. Seriously. But we have to go to New Mexico and school and skate schedules have us booked up.

The cat is on the table next to me purring, then I hear a voice asking, “So are you dead?”

I look up to see The Ghost sitting across from me. Yes, that ghost.

He smiled that nasty shit eating grin of his, “Sort of like those parasites that go dormant for years on end then come to life when they smell blood.”

“Do you need something Nigel?” I asked.

He shrugged. “Not really.”

Tonight his eyes were almost black under his long lashes. He smiled and started to fade out, then reappeared in the chair next to me. He is so annoying.

“Juliette, my dear, you were never a real person were you?”

“Then how can you be undead? I mean you’re a Vampire so you’re supposed to be undead. But you were born alive as a Vampire, so you didn’t die first did you? That wouldn’t make any sense. Then again, I’m a ghost and that never made any sense to me. I was alive and then I was a ghost. And my body is in a box marked with a stone. People still come by and visit there. I’m hardly ever around when they visit. And here we are talking. Fancy that. So what exactly is undead? Isn’t it weird to be a monster? Do you ever feel like a freak of nature?”

“You’re done Juliette. I’m just going to hang out for a while. Go back to what you were doing.”

I tried to ignore him and started to look up stuff, you know research on the book I haven’t finished yet.

“Hey, Juliette, mind if I take your car?”

“Just checking to see if you were listening.”

I reached out and touched where his hand was. My palm rested on the table but it made him smile. “I’m listening. It must be difficult to be real and then not real. Teddy had a Hell of a time adjusting. How are you doing with it Nigel?”

“Alright I guess. I need to get out and haunt more but it gets old after a while. Not quite 30 years and I don’t think I’ll ever get used to it. Just kidding. It’s fucking great.” He almost spat that out with a ghostly snarl. Not as good as a Vampire would snarl it out but almost.

We sat for a while and listened in to Teddy’s phone call. They were talking about diamonds.

Nigel stood up and straightened his cufflinks. “It was fun. I gotta go.”

He smiled. “No, hot date.” Then he vanished with a thin bit of blue smoke like an exotic cigarette, but without the smell.

You can’t always define friendship or connections or old loves or old pals. Is it a good thing or a bad thing? It’s just a thing. 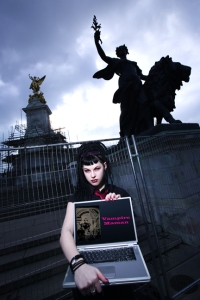 7 thoughts on “Where’d you hear I was dead?”