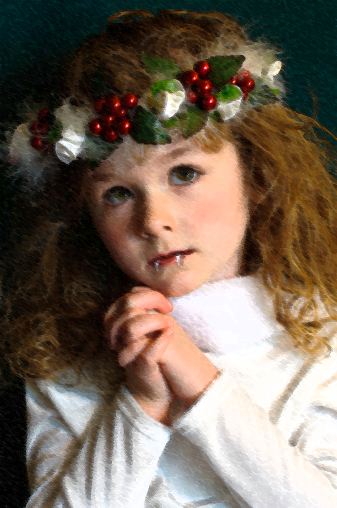 “Where’s that friend of yours, the Welsh Corgi?”

“He went north to the Pole. Seasonal help with the fat man.”

“His third year. He makes enough money to last the rest of the year. In fact in five years he’ll be able to retire.”

I was sitting in the booth next to a couple of Werewolves, nursing my coffee until Steve showed up.  I pride myself on the number of conversations I’m able to overhear everyday. Then again, I’m always listening. It is my nature to listen and know everything that everybody is saying and feeling. It has nothing to do with being naughty or nice and everything to do with being a Vampire.

Steve slid into the booth and faced me. I mouthed the words, “Werewolves behind me.”

He smiled then took my hand. “You look sexy tonight.”

If I’d had enough blood in my veins I would have blushed.

After coffee and cherry pie we walked the streets, in and out of art galleries and glancing into bars and restaurants. Christmas lights twinkled in some of the windows. Other windows were painted with holly and Christmas tree designs.

Outside of a trendy club we saw a couple of Vampires we knew talking to a group of attractive young women. They nodded at us. We nodded at them.

I kept thinking about the Werewolves in the cafe. “Steve, do you believe in Santa Clause?”

“Why are you asking?”

“One of the Werewolves was saying a small friend of theirs was going up to the North Pole to work for Santa Clause.”

“I didn’t believe in Vampires until, you know, until I became one.”

He had a point there.

We ducked into a bar full of happy people, all talking and catching up on the last Saturday of the Thanksgiving break. It was warm and collars became undone and scarves were loosened. It was a beautiful sight for a couple of Vampires.

For the next half hour I’d be warm so I knew they might not suspect I was different from the rest of the bar patrons. I sat on the bar stool next to them. The large one glanced over at me.

“You were in the diner. You’re a Vampire.”

“Busted,” I said. “Hey, I don’t mean to be rude but while I was waiting for my friend I overheard you talking about your friend going to the North Pole.”

“Sure, no problem. Seriously I love the dude, we’ve been friends forever, but I’m worried he’ll end up being part of some sled team or eaten by bears on the way up.”

“Is there really a Santa Clause?”

He smiled. “We’re here aren’t we? I mean, it isn’t so much as him making toys and all. It is more of a fairy dust sort of thing if you know what I mean.”

I never thought I’d hear a Werewolf talking about fairy dust and Santa, but I’ve come not to be too surprised by anything. It was sort of nice.

A warm hand slid into mine. Steve was next to me, also warm for a short time. We spent the rest of the evening talking with the Werewolves about living like Santa Clause. You know, living in a world where everyone says they believe in you but you know they don’t.

As we went back out into the street I saw a couple walking a tan and white Corgi dog. I looked up into the sky and saw a shining star above the light of the city. Maybe Brad made it to the North Pole. You have to believe. After all, it is beginning to look like Christmas. You gotta believe.