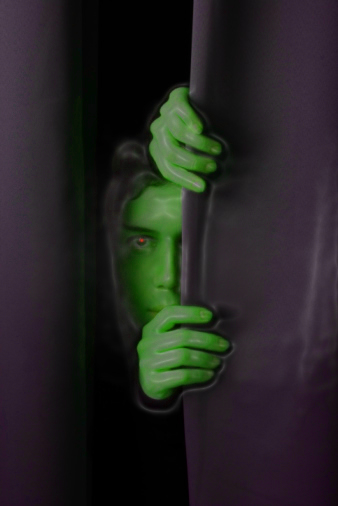 I took off my sweater and handed it to my brother Aaron. There was no way I was going to crawl on my stomach under the crawl space of a house with it on.

“So tell me again why you can’t get the bodies out from under the building first?” I had to ask.

“They’re not quite dead yet and they might attack Austin. He’s human, a Regular Human,” my brother told me. Austin by the way is a Regular Human and sometimes Vampire Hunter and usually just a guy who does a great job restoring old buildings that seem to be filled with scary shit like ghosts and old musty Vampires.

And of course Aaron was wearing a $5,000 suit of course he couldn’t crawl under the house.

“You might know them”, added Austin, meaning the creatures under the house.

Wearing garden gloves I crawled on my  hands and knees over bare dirt.Even in the dark I could see assorted bugs and cobwebs. Rat droppings were scattered around. Why the crap would any Vampire want to sleep under floor boards?

About 20 feet into it I saw the boxes. OK they were coffins.

I thought back of when I was a kid and always the one to crawl under houses and into tight spaces. It wasn’t because I was small. It was because I pretend to be fearless and now it is because I don’t take any bull shit from Shadow Creepers and dusty old Vampires who can’t deal with the modern normal world. We’re not having a Nosferatu and Dracula Hoedown kids, this is the 21st Century.

The lids were on the boxes. I managed to kneel on my knees without banging my head on something and pushed one off. Inside was a male in a pinstripe suit. His face was waxy looking and pale. I noticed sunken cheeks and lips that seemed a little thin. He hadn’t fed in a while. The box next to him contained a female. Skin stretched over her face, a hint of teeth including fangs showed beneath parted lips. Oh come on, all Vampire girls know not to sleep with their fangs exposed. She wore some sort of black dress thing. The scent of rotted roses and cigar smoke came from her box. In the third box…nothing jumped out. It was another male. I recognized the face. His eyes open a bit, yellow green rolls to stare at me. I see recognition in his face; a fact that was once handsome and could be again, but he was so strange, so weirdly in the shadows and cold, not like Vampires I associate with, but like a dead fish.

Then my butt vibrates. My phone. I pull it out. Garrett, my darling son is calling from college. I’m a mom. I must answer.

“Hey mom, what do you call two ducks and a cow?”

“Good one. What do you call an Englishman, two ducks and a cow?”

I hear a groan from one of the box. I slap it hard with my hand and hiss at it. The noise stops.

I keep my eyes on the yellow green orbs that watch me as I talk to my son. He rattles on about classes and girls he knows and sings me a song he wrote. He says he goes to the beach almost every day and is going to go surfing on Sunday. He says it is the perfect college for Vampires. He is so excited about school. My heart melts a little.

Then he asks me what I’m up to.

“I’m under a building with three boxes full Shadow Creeping Vampires. You know me, everyday is Halloween.”

“Helping your Uncle Aaron and a friend. Long story, but the short version is that I was the only one wearing jeans and I’m smaller than they are so I got elected.”

“Love you too sweetie pie.” I looked at my old friend. OK he wasn’t a friend. I’d met him before, a long long time ago. “What are you doing here?” I said trying to keep myself from sneering at him.”You look like a fucking Zombie. What is wrong with you people? Have you lost all self respect?”

“Juliette,” he whispered my name in a dry voice, like old coffee grinds and gravel.

He started to tell me something in French that I couldn’t quite make out when I stopped him. “Listen, you have three choices. The first is that you agree to live like Modern Vampires and stop this nonsense of lurking around like you’ve just come out of some creep show. The second is that I leave you to the Vampire Hunters. The third is that you let one of my friends, and I use that term loosely, take you to San Francisco where you can be with others of your kind. But you can’t stay here. We have enough problems in Sacramento without your kind.”

“My kind?” He opened his eyes wide and showed his fangs.

“That is exactly what I mean, you giving me the evil eye and trying to scare me with your ugly mug. You used to be handsome and well, you were never charming but you used to be, well, not THIS.”

I crawled back into the sunlight which was no cup of tea, believe me. I might spend time during the day but the sunshine, especially after the darkness under a house, always comes as a shock. I pulled out my sunglasses put them on then took a deep breath and brushed off my pants. Filling Aaron and Austin in on the situation I told them that I’d let them decide what to do with Jasper and his friends.

I had to go home and take a shower and scrub my skin off with steel wool, or at least that is how I was feeling. The image of his eyes stuck in my brain like Poe’s Tell Tale Heart story.

“It is impossible to say how first the idea entered my brain; but once conceived, it haunted me day and night. Object there was none. Passion there was none. I loved the old man. He had never wronged me. He had never given me insult. For his gold I had no desire. I think it was his eye! yes, it was this! He had the eye of a vulture –a pale blue eye, with a film over it. Whenever it fell upon me, my blood ran cold; and so by degrees – very gradually –I made up my mind to take the life of the old man, and thus rid myself of the eye forever.”
― Edgar Allan Poe, The Tell-Tale Heart and Other Writings

His eyes will haunt me for sure. Maybe I’ll check on him in a few months time, out of morbid curiosity. That is, if the Vampire Hunters or other creatures don’t get them first. There are Shadow Creepers who seem so vile, but then there are other Vampires who I don’t even dare name or ever seek out for any reason.

Like I’ve said, Halloween is never far from my reality.

I called Garrett back. He listened to my story. I didn’t make it into some cautionary tale or anything like that. We just talked. He told me that I was the most awesome mom ever.

So anyway, that is what I did today.