This just might be the most controversial Burning Question to date.

Fall is almost here. ALMOST. It is cooling off in my neck of the woods but I know September will bring out one last evil HOT SPELL despite the fact that the trees in my neighborhood are starting to turn yellow and red. I live in California so unless you live in the mountains there is a snowball’s chance in Hell we’ll have a nice crisp Autumn in September. 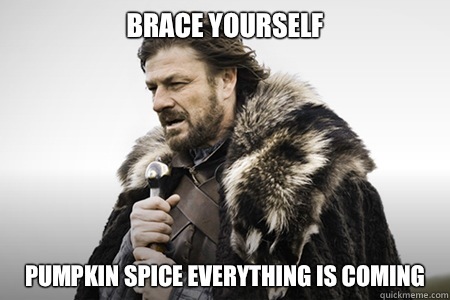 I almost always put cinnamon in my coffee, year around. Sometimes I add a bit of nutmeg. This week I’m adding some sugar free coconut flavor. When the weather cools down I just get lazy and buy a small container of Pumpkin Pie Spice. YES that is PUMPKIN SPICE. Some people add actual pumpkin puree to their coffee but that gets you into the gross-stuff-at-the-bottom-of-the-cup territory. And who has time for that?

But there are those who don’t like Pumpkin Spice anything. They don’t understand. They despise the excitement and fluttery joy brought on my this mix of spices and caffeine. Seriously, is there too much Pumpkin Spice BS out there? Not just coffee but everything from muffins to air freshners to cat food.

So where do you stand on this important issue? It is still 90 degrees Fahrenheit outside. Do you really want anything like pumpkin or are you still working on summer strawberry flavors and trying to keep cool? Or do you believe that if Pumpkin Spice is here that FALL will surely follow.

Burning Question #26: Is it ever too early for PUMPKIN SPICE? 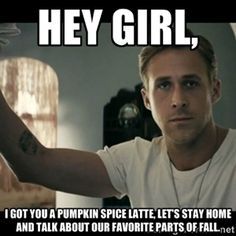 So I leave you with thoughts of nice drinks and thoughts of lovely weather and maybe that elusive, what is that called, that thing when water falls out of the sky. Oh right. Rain. It is called rain. I haven’t seen any of that since April. But I can get a Pumpkin Spice Latte.

See you next Saturday for the next Burning Question.