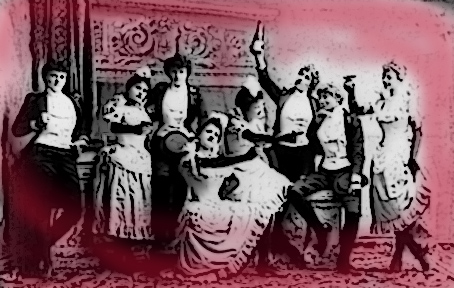 “I doubt if our parents care what we do, or anything about us at this point,” my brother Val told me. It was November of 1878. I had just turned nineteen and he was twenty. They’d moved to San Francisco, leaving us behind in Sacramento. The house they’d left for us was like a rabbit warren of rooms. Our brother Aaron, aged twenty five, was married and living a mile away in his own brand new Italianate mansion (where he still lives). The eldest two (Max and Andy) had long moved on and were now in San Francisco setting up their glorious careers.

They’d sold the big house we’d grown up in, which burned down as soon as we’d cleared out. I often wondered about that, considering we had been a large family of Vampires and didn’t always do things the same was as everyone else. Our (mine and Val’s) house was built in 1869 with a lot of rooms with no purpose and tall stairs from the sidewalk up to the front door in case it flooded. We had a front porch, a back yard with a few rose bushes, and not much else. It was plain and un-charming.

Val and I were determined to give this house charm. We decorated our modest home with used furnishings and a lot of green and cream colored paint.

After that we decided to do what most young people would do and have a party.

“Should it be all Vampires?” I had to ask.

Val shrugged, “No. We can invite others. We will have to warn our fanged friends to keep to themselves and only drink from bottles we planned to keep well hidden in our kitchen.

I told him not to invite all ladies and he started to argue with me.

“NO,” I said. “You are not going to turn my home into your own personal whore house.”

My brother looked at me as if I’d slapped him in the face. “I would never,” he said. “Never.”

I held my shoulders back and my head high. “Valentine, I will never judge you or be like some warm blooded prude, but I expect a certain amount of modesty and decorum from you.”

“Fine. I will allow you to see my guest list, as I expect you to show me your guest list.”

“We don’t cook. We hardly eat. We don’t have domestics.”

“Where would we find one?”

“We could put out a post. Cook wanted for fashionable party. Or we could find Constantine. He knows everyone.”

“And he is always fashionable.”

Constantine was both a Vampire and extremely fashionable but he had just jumped on a train to travel east, then take a boat to Europe to buy art. So we put up our flyer and waited. Soon a small man named Orlando George St. Cloud came to our door. He said he had cooked for the royalty of Europe, the Emperors of China, and the highest of Sacramento high society. We didn’t really believe him but we hired him on the spot.

The night of our party Mr. St. Cloud fixed:

Filet of Sturgeon with brown butter and tarragon

Tomales Bay Oysters on the half shell

Pears poached in wine and honey

Meatballs with wild dill made with ingredients of unknown origin.

We also managed to acquire copious amounts of alcohol.

Fifty four guests arrived. Nobody went hungry. Twenty were female. Thirty four were male. Twelve, including Val and I were Vampires.

Of course the party was a success. Val did not sleep alone. I watched the sunrise with a dozen people in my garden before going inside, drawing the curtains and sleeping for the next two days. Mr. St. Cloud brought in a crew to clean and lock up.

For the next thirty years Mr. St. Cloud cooked for us when we needed it. He also taught us to cook. He told us, “One day I shall be gone and you will be at a loss.”

I learned to cook everything except the rat tail soup. I never cared for eel. Many of the dishes made me sick but I learned to cook them anyway. Eventually Val also learned to cook, and he even attended classes. We both became experts in cooking for Vampires such as us. We don’t live on blood alone.

From then on Val and I have both welcomed guests of a wide variety to our homes to celebrate friendship and love.

Wishing you all a wonderful Thanksgiving and welcome in the holiday season (which started on Halloween.)