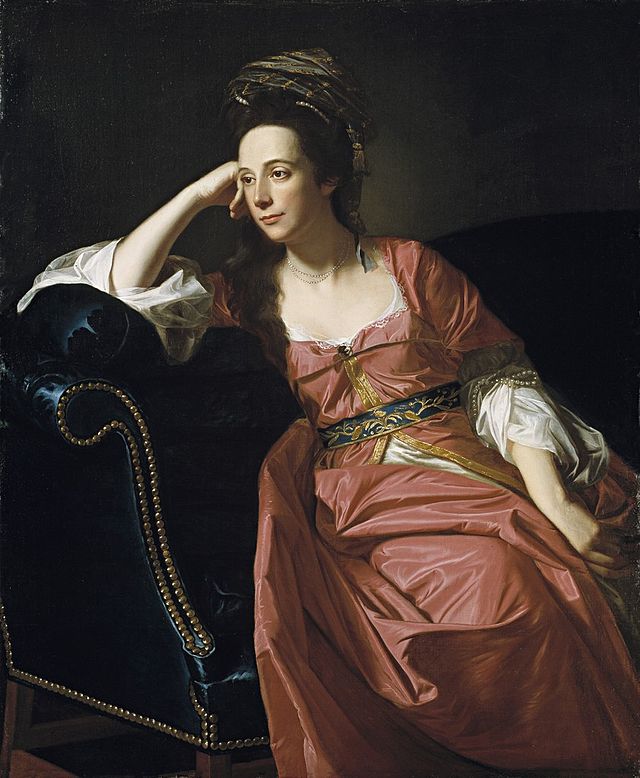 Some you might have heard of the new mini-series Sons of Liberty (not to be confused with Sons of Anarchy.) It was shown earlier this week on the History Channel. Of course this is the History Channel that has little or nothing to do with history anymore. It is more into shows about old junk and inbreeding among humans. Yes, we like Oak Island and my husband is a Pawn Star and Mike and Frank fan … but really where is the history? When the History Channel first came out it was known as the Hitler Channel because everything was about, well Hitler, but I don’t even know what to think now.

Sons of Liberty was not painfully boring as the other recent Revolutionary War series Turn. As you might recall, Turn was the one with Jamie Bell playing a guy who seemed to enjoy suffering in Colonial America. It was long, drawn out and totally confusing. A big snooze.

So I’ll try to make this quick because I have to drop someone off at school this morning then I have real work to do (places to go, people to see etc.)

The American Revolution and those who lived it were far more interesting than anything television producers have put out in their fictionalized versions. I hate to sound like another TV icon but “Just the facts ma’am.” PLEASE.

Getting back to Sons of Liberty…

The six hour mini-series on the American Revolution was sort of disjointed and confusing and half of it completely fictional. I know I already said that but I have to say it again.

Samuel Adams was a rock star of the American Revolution. But was Sam Adams a seriously sexy dark  brooding make your loins ache for him sort of guy? I never met Sam Adams, but I bet that wasn’t the usual reaction to him. Yes, he had a larger than life persona, and women might have been falling all over him but could he turn around and pass for a dark brooding sexy please-have-semi-rough-sex-with-me-please Vampire like Ben Barnes (the actor who plays Adams)? I doubt it. I know actors can’t always look like the people they play but come on History Channel. Really? Sam Adams was 49 years old in 1771. In 1776 he turned 54 (older than the average life span of the time.)

How the History Channel Sees Sam Adams in 1771. 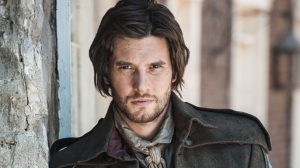 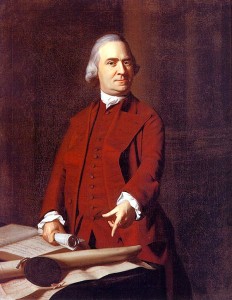 Other players in the Revolutionary War include:

John Hancock who was played by Rafe Spall. He was one of the only actors who was close to the real age of the character he played. The looks, though not exact, were closer than the others as well. And if you don’t already know, John Hancock was known for his beautiful handwriting.

How the History Channel sees John Hancock in 1771. 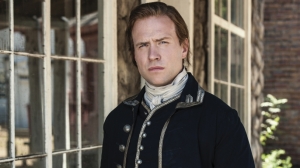 Joseph Warren was a wealthy and educated widower with four young children. He unfortunately and tragically died in the battle of Bunker Hill. I seriously doubt if he had an affair with the part-time spy and wife of General Gage, Margaret Kimbell Gage. Warren was 30 in 1771. Margaret Gage was 37, not the delicate young thing (played by the lovely Emily Berrington.) The real Margaret was beautiful and fashionable but risking an affair was dangerous business. Very dangerous. Margaret was said to have anywhere from 8 – 11 children (she gave birth to one in 1776, how fitting) which leaves her little time or energy for an affair with a younger man. I might be wrong but I doubt it. My daughter mentioned “Ohhhh a revolutionary cougar.” But then again, when something is on TV they MUST add the gratuitous sex scenes. And if you’re a fan of gratuitous sex scenes I hear there will be a second season of Penny Dreadful.

How the History Channel sees Joseph Warren in 1771. 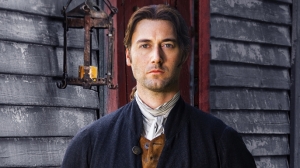 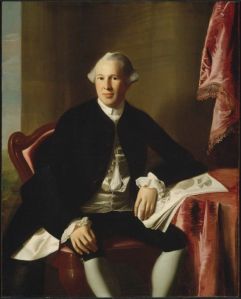 How the History Channel sees Margaret Gage in 1771. 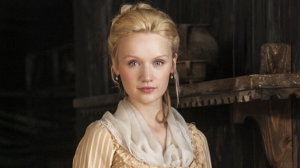 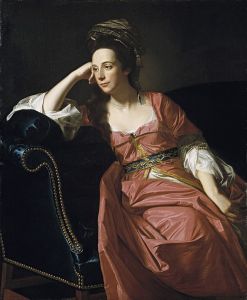 So there you go, the unreal version of the American Revolution from the viewpoint of The History Channel. Huzzah.

So what am I trying to say here? The people involved in the American Revolutionary War were already sexy enough without someone rewriting them into something else.

More on Tee-Vee, history and Vampires later. By the way, neither Joseph Warren or Paul Revere became Vampires or Werewolves. It didn’t happen.

And if you DO need to involve yourself in some gratuitous sex/romance/creativity AND make history – don’t forget to enter the Vampire Maman Love Letter Contest. CLICK HERE for details.