Garrett just turned 22 last month and is in his final year of college at the big university right on the ocean. Final year of undergraduate work that is. He is still living with his best buddy Randy.

When I spoke with him yesterday he said, “You never blog about me. I talk to you every day. Almost every day. I text you all the time.”

I’m learning how to transition from minor children to adult children.

So I said to my son, “You told me that what I wrote about you was embarrassing. Maybe I’ll just write about Randy.*”

The last time I spoke with Randy, a couple of weeks ago, he was telling me about some discussions he’d been having in one of his classes about free will, choice, and what we choose to believe. Somehow the discussion of things we can’t prove like honest politicians, and other cryptozoological beings came up. 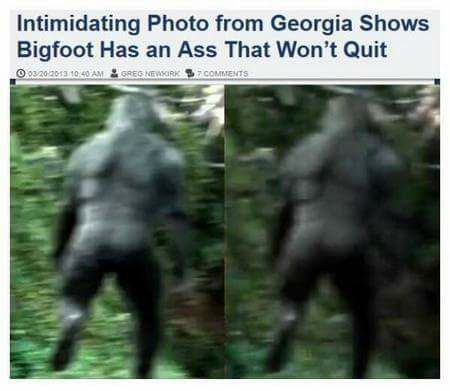 He’d sent me a funny Sasquatch meme. I told him that it got that ass from doing squats. That is why it is really called a Sas-squat.

But seriously, for as long as I can remember there have been stories of Bigfoots aka Sasquatches and the likes. So often people claim to have seen a body of one. I was flipping through the TV channels the other night (Vampires and others are known to do that) and say some guy who’d claimed to have shot a Bigfoot. He said it looked at him before it died. It had whites in it’s eyes just like us. It was small so he could have carried it to his car, but he didn’t. The man claimed because he was on National Park land he was afraid he’d get in trouble.

Really? Dude you shot a BIGFOOT.  A BIGFOOT.

If I found a live Bigfoot (Sasquatch) or even a body or a body part, HELL YEAH I’d take it. Are you kidding? I wouldn’t think twice. I don’t care if I found it in the forest or on the steps of the California State Capitol building. The first thing I’d do it take it over to the UC Davis Vet School and say “HEY, take a look at this!”

I would not advise doing the same if you found a Vampire or Werewolf. I’d advise you back away slowly then RUN as fast as you can.

That night I was hanging out with my husband Teddy and Clara. Clara is 18, in college, and still at home until she transfers to a university by the ocean.

The subject of businesses near my husband’s came up, specifically spas.

My husband and child said they thought I should open a spa called V and next door have a spa for house cats called “The Pampered Pussy.” Then they almost laughed until they were practically falling off of their chairs.

What brought this up? There are spas where you can get your Yoni steamed. Yes, steamed. It will cure everything from unhappy crotch syndrome, tension, Scrophularia, and give you an elevated sense of well being among other things.

It is called a V-Steam. V stands for vagina, or Yoni, or cootch, or Vajayjay, but we prefer vagina in Vampire Land.

Why have women started to call their vagina Yoni? Because they’re cute and musical? Maybe. You never know.

At these spas you sit on a chair that looks like an old fashioned potty seat, spread your legs and get your parts steamed. WTF?

My husband suggested that someone would be in the background playing a harp. He hates harp music.

I said a saxophone. We all laughed then Clara suggested Kenny G. Then I thought of Yanni. Why not? Steam your Yoni to Yanni.

Holy shit. They have group parties too. Yes, you can get steamed with all of your friends, drink wine, and even paint a pretty picture at the same time.

Then the subject of the show Naked and Afraid came up. Bugs and bug bites. Say no more. Nobody, not even the most hardened Vampire wants bugs near their Yoni, not even Kenny G.

We tried to avoid politics. It is just so frustrating. However, I was called up to be a poll worker again for the next election. I show up and after my training know more about the voting system than 99% of people who are running for or currently in office.

Aside from my husband who is in a slightly different mindset than most of us I do not with good things upon a lot of people in Washington D.C.

We heard rumor that the cast of What We Do In The Shadows might be having a show on FX. I love that movie. It is absolutely adorable. It is as cute as Vlad (Vampire Diary.)

I usually really don’t care for most Vampire movies. They tend to be seriously bad and boring and stupid. But it makes for great drinking games.  BUT there are exceptions. Don’t hate on me. Most Werewolf movies are even worse than Vampire or Ghost movies. I’m sorry Werewolves. We still love you out of the movies (sometimes, don’t let it go to your heads because you’re still assholes.) 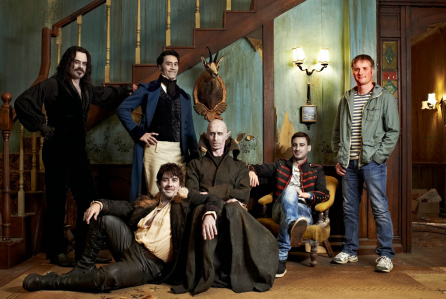 But back to Garrett…

That is a thought that no parent wants to hear concerning their own child.

We also talked about The East Area Rapist, also known as the Golden State Killer. He was found maybe six miles from my home. Back in the 1970’s he raped women in their homes a few blocks from where I live now. I lived near there at the time. I’m glad they found him. He’ll rot in Hell for sure.

In Northern California we seem to have our share of serial killers. Sometimes it seems like more than our share. Then again I hear of all of the weird deaths in places like rural Nebraska and the swamps of Louisiana. Things are weird. There are horror stories and then there is real life. It is a fine line between the two. Truth is often stranger and more horrific than fiction.

Anyway, Garrett just texted me again and I have to go.

Love your children. Talk to them. And even when they’re grown they’re still your babies. They’ll always be yours. Listen, love, learn, and always be their heart and soul.