“The damn circles are back. My crops are gonna be ruined by it all. We’re already having a cold planting season, and now this, right before the harvest of our winter crops.”

Druce listened as Farmer Wyne told him about the return of the crop circles. As the local Warlock Druce had done all he could to help. Damn this was frustrating.

“I’m as distressed as you are Wyne. This is not good. Not good at all. Right now I’m brewing up some berry tea. We can get ourselves a cup and go take a look.”

The men walked out to the field about 100 feet from Druce’s cottage. He was surprised he didn’t hear anyone out in the field the night before. He took a sip of tea and surveyed the damage.

“Didn’t you hear anything?” Asked Wyne.

“I was in a deep sleep last night, lulled by the storm,” said Druce.

A large pattern of circles made by knocking over the tall grain had been made in the middle of Wyne’s field. It wasn’t the first time. A faint unpleasant smell came from the circles. Druce couldn’t place it.

He stood in the middle of the largest circle and closed his eyes, as he attempted to get a sense of it all. There were no spirits or demons present. There was no magic. There was nothing but a lingering unknown smell.

Later that afternoon Druce walked down to the beach and called out to his friend Morcant the Selkie. A large seal poked it’s head out of the water, then went under again. A few minutes later a man walked out of the surf carrying a seal skin.

Selkies are seals when they want to be and men when they need to be. They carry their seal skins with them so that nobody will steal them and trap them forever on dry land.

They talked of the crop circles but could come up with no answers. They did decide to roast some fish Morcant had caught and headed back to Druce’s cottage.

The two old friends spoke of a myriad of unexplained events that had happened since that idiot Wizard Merlin had moved into the old castle on the hill. It took a day or two to walk there but it Merlin was still too close as far as Druce was concerned.

Druce had once asked Merlin about crop circles, lights from the sky, and strangely dressed folks wandering around in the shadows. Merlin said the strange events must be because of fairies and their displeasure with the king, who was even more of an idiot than Merlin. Or, Merlin said, it could be that the old gods were angry at King Arthur for worshiping the new Christian god. Druce thought Merlin was full of shit and never asked him about it again.

After they finished their dinner of fish and nut cakes, and were cleaning up there was a soft knock on Druce’s door.

Standing in the drizzling rain was a man and a woman wrapped in heavy cloaks.

“Are you Merlin the Wizard?” asked the man in a strange accent.

“I told you Merlin was just a myth,” said the woman.

“Merlin lives down a way,” said Druce. “Do you know him?”

“Well,” said Druce, “Merlin is a bit socially awkward and insecure. He might visit with your or he might hide and pretend he isn’t home. Have you come a long way? I sense that you have.”

“You’re a Warlock?” asked the woman. “What does that mean?”

“It means that I can tell that you’re not from around here. It also means that you should tell me your names and come in out of the rain. I sense you aren’t here to kill or rob us. I know you have weapons in your pockets but you aren’t comfortable using them. We won’t threaten you. I am Druce the Warlock, and this is my friend Morcant.”

The woman eyed Morcant involuntary. Of course she did. Silkies are unusually attractive and humans find it difficult to resist their charms.

“I’m Trinity, and this is my friend Ryan,” said the woman as they entered the house.

Druce and Morcant eyes the sturdy shoes and the fine weave of their clothing. They noticed the smell of flowers on the woman’s hair.

“So you’re here to see Merlin. I suppose you want to take a look at the Round Table and all of that as well?” said Morcant.

“You’ll be disappointed. They’re a rather unorganized lot. The King has a good public relations staff but it is really a disaster over at Camelot,” said Druce.

“The Camelot always stinks too. They never do maintainace on the moat like they’re supposed to,” said Morcant.

Trinity and Ryan looked disappointed. “This is unexpected,” said Trinity.

“And speaking of unexpected, do the two of you know what is causing the crop circles around here? You’re not behind it are you?” Said Druce.

“Why would you ask that?” said Ryan, as he shifted in his chair.

“I don’t know, you being time travelers and all. Seriously, we get your type all the time.  You come her wanting to see the glory of days gone by, the holy grail, magic, and maybe a bit of romance… wait, wait, hold on a minute. I have it figured out. Your time wagon, or machine, or whatever you call it is making those crop circles,” said Druce, now standing up.

“Whenever strangers like you show up with your odd accents and sturdy shoes show up our farmers complain of crop circles. Dude, you have to stop it. You’re ruining the harvest,” said Druce.

Of course Trinity and Ryan had no idea that their machine had caused the crop circles.  They did however stay the night and talk until the sun came up about their lives in the future. Trinity was a history professor at one of the great universities in her land. Ryan was something called a cultural anthropologist and a former Navy Seal. Being a seal himself, Morcant was fascinated with this fact and asked many questions. Ryan was even more fascinated with Mocant and the whole idea of Selkies.

The following week Druce leaned that Trinity and Ryan had indeed found their way to Camelot. King Arthur was down due to food poisoning. The place indeed was extremely stinky. There was no round table, just a big long table in a room full of shabby tapestries. One of the more interesting things were the displays of Roman relics left over from the past century.

They’d also met Merlin who was brooding and writing love poems to female spirits who just thought he was sad and weird.

Years, rather centuries later Druce would come across Ryan again. They’d run into each other at a museum. Druce, because he was a Warlock, was still alive. Ryan was in his own time – the time in which he and Trinity been born.

They caught up on their lives and exchanged their cell phone numbers.

Druce looked at a painting by the artist Wayne Thiebaud. It was of fields and orchards.  A river intersection. The painting was a favorite of Druce’s. He thought about the crop circles. It was fitting, as everything eventually circled around, be it truth or just a myth.

Suddenly he got an ear worm. Dead or Alive. Round round round. Odd after all these years how unexpected and utterly weird life was. It was also a comfort to know that a lot of things just never change. 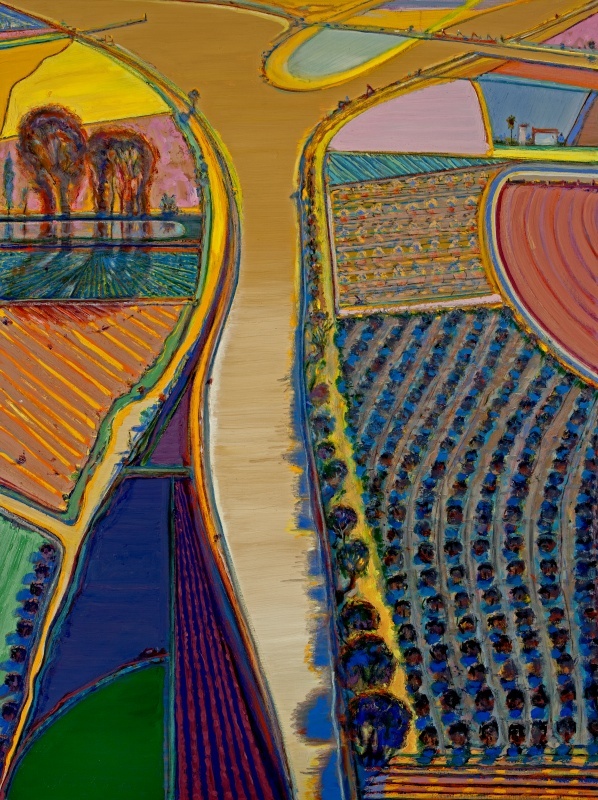