Despite the fact that I have become she of the empty nest and have no children at home for Halloween fun, I’m finding myself extremely busy this October.

I’m retelling a story from 2015 today. Last year my husband and I went as Simon and Garfunkel for Halloween. It was absolutely the best, but I’d almost forgotten the time we went as Mr. and Mrs. Weasley. Maybe this year I’ll finally go as Little Hagrid.

Little Hagrid, being a Vampire at Halloween, and Friends who aren’t Vampires

“Teddy and I have been invited to a Harry Potter Party. Why in God’s name our friend chose that theme I’ll never know. Anyway, I was thinking I could find some ugly baggy old sweaters and we could go as Mr. and Mrs. Weasley. What do you think?”

He looked at me with shock. OK almost shock. He looked at me like I was the weird kid asking him is he ever ate cat brains, or something along those lines.

“I thought about going as Little Hagrid. Get it? Little Hagrid because he was huge and I’m only 5’4″ and Hagrid was about seven feet tall.”

I could hear the gears turning in his brain. Vampires going to a costume party? Vampires dressing up like Harry Potter characters? Little Hagrid? WTF?

“It is always funny when a woman wears a beard,” I said as I put more drawings out on the table. “Here are the rest of the sketches. If you like them I’ll finish them up.”

Oh right, this is where I back up and tell you what is going on. Dr. Austin Durant, history professor and sometimes weird Vampire Hunter, but all around normal guy, had hired me to create some drawings for him for a book he is writing. He likes my work, plus I lived back then, in the middle of the 19th Century, granted I was a child at the time.

I shouldn’t have asked him about the costumes. Back to the drawing board, literally.

“The Weasleys would be funny,” he finally said. “I could see that. It would be easy too.”

I smiled minus my fangs. We both turned at the sound of a tap on the door.

Standing there, as impeccably put together and flawlessly handsome as ever, was my friend Jack.

“What are you wearing to the Harry Potter party?” I had to ask. He and his wife aren’t Vampires but they’re going too.

“We’re going as Dobbie and Malfoy,” he said with a wink. Damn, that man was handsome, with blood like the finest Cabernet. Obviously Jack isn’t a Vampire, but a dear friend. I’m his Vampire.

“I’m going to be Dobbie,” he said. Then we both laughed. You have to admit that is funny. Jack is six feet tall after all.

I introduced Austin and Jack. Austin intuitively knew that Jack wasn’t a Vampire. Austin knows a lot of things, but as cocky as he can get he has never really come to terms with the fact that Halloween has come to his life every single day of the year.

About five years ago Austin Durant started restoring historic structures (old buildings) and has since run across all sorts of nasty old things like dead bodies, dried up old shadow creeping Vampires, and ghosts. My brother Aaron, who is an attorney and a Vampire, is Austin’s attorney and in turn hires Austin for various tasks, like removing unsavory things from buildings.

Anyway, enough of background material and back to Halloween.

Jack fawned over my sketches and marveled at my talent. My stomach started to rumble (nobody could hear it but I could feel it.) I’d have to wait for lunch. Lunch was Jack.

Life is full of such moments.

Halloween is almost here and I have yet to figure out costumes, put up decorations, figure out logistics of parties, and most of all think up a yearly Halloween theme for this blog.

In the meantime you can read these wonderful horror anthologies. Available at fine online booksellers. 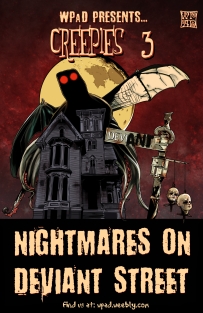 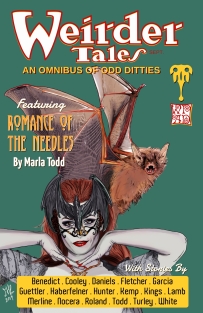 Or you can cut and color paper dolls for Halloween.

Or go look for Halloween Hotties.

Jack had to get back to work. Austin looked at the drawings for a bit more. His next class wasn’t until 2:00.  I watched him look at the details I’d added, just small things like a cat sitting in on a roof, or a style of hat.

He looked up and straight into my eyes, a dangerous thing if I’m in the right mood, which I wasn’t. “You could offer so much. You were there. You have gone through history. You’ve seen it your own eyes.”

“Do you think anyone would listen?” I asked him that obvious question. “Nobody cares about history. They would rather keep making the same mistakes over and over. They’d rather do what is easy. They’d rather not know the truth.” I locked his eyes with mine. I could feel him feel a slight panic. That was intentional. He brought out the Vampire in me. You know, I can’t be all touchy feelie nice all the time. “Dr. Durant, I don’t want to end up a dried up husk of a Vampire underneath one of your buildings so I will continue to keep my thoughts to myself.”

Then I thought about my blog… HA HA HA. But I don’t have to worry about you. Out of my seven regular readers at least two of you are Vampires and I’m sure at least one is a Zombie.  Anyway…

“You could share with me, just me,” said Austin.

“Yes, I could. I’ll draw it for you. I’ll tell you my stories so you can get a better understanding, as long as you only use my words for a stepping off point, or for inspiration.”

“Thank you Juliette,” he said to me. He looked calm and cool. I could feel him wanting to sweat it out.

“So what are you going to be for Halloween?” I had to ask.

“I don’t know, maybe a Vampire.” He flashed a dimpled smile. I knew why the girls all liked him.

So that is it for now. Have fun and well, have fun. That is the goal for today. And do something creative. And hug your kids. And talk to them. Always talk to your kids.

Oh, one more thing. For more about Austin and his story see the side bars for the Austin and Elizabeth story links. For more about Jack just search for his name. Yes, this is the old back story ploy not that anyone will really look.