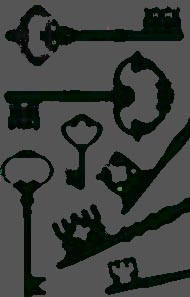 Every have one of those days when getting out of the house seems nearly impossible?

I couldn’t find my keys this morning and of course I was running late. And no I can’t just change myself into a bat.  That only happens in fiction.

I’m scouring the house but nothing. Then I heard a throat clearing.  I turned around and behind me is the Ghost, damn him, with my keys.

“I believe I have something of yours.” He said that with a nasty curl of his lip then flicked a lock of black hair out of his eyes.

I reached for the keys and they vanished, along with the Ghost.

I let out a string of not so nice words (the kind moms pretend not to know) and then tried to sense where he could have gone.

Off of the bookshelf I grabbed the box with all of the spare keys. Does anyone else have keys to cars, doors, and safe boxes they don’t even remember?

Anyway I grabbed the spare keys to my car and yelled, “If you don’t give me my keys back I’ll pour a bottle of Pinesol on your grave. I’ll pour a gallon on it.”

“I know where your grave is Nigel. I looked you up. I know all about you.”

I heard a clang as the keys dropped on the tile floor of the kitchen. I picked them up and headed for the front door.

He stood there waiting for me. “How’d you find out where my grave is?”

“I don’t even know your last name. How would I know where your grave is?” I looked at him with such calm as his eyes narrowed and threatened to turn me to ice.

“You’re a Vampire and a liar,” he snarled at me.

“And I’m really good at being both.” Then I smiled and headed out the door.

Anyway, tell your kids that lies and bad words are not acceptable…of course unless you’re dealing with a Ghost.

Note: This was first posted in 2013. Today is a busy day for me so I thought you’d like more fun and a blast from the past from Nigel and me. Sure he’ll hate me for it but the guy is a Ghost. What do you expect? On the other hand being a Ghost has nothing to do with it. I bet he was an asshole when he was alive.