My teenage son who is always surrounded by girls and a born flirt is off to a Valentine’s Day party at a friend’s house tonight. Gone are the days when new drivers can legally drive with a car full of their friends so my husband is taking Garrett and his friends Randy, Chloe and Ione.

Clara is going roller skating with her friends – their usual Friday night activity. She is in deep water with her dad for her cell phone addiction but that’s another post.

Teddy spent the day in San Francisco. Part of his business is dealing with estate jewelry. He delivered an engagement ring to a customer. The ring was first given to a bride in 1890. After the bride ran off with the grooms best friend the ring was given to someone in 1939. The young bride was widowed during the war and remarried in 1946. She sold the ring to a man who gave it to his daughter when she graduated from college. She died in India while looking for enlightenment and her boyfriend brought the ring back to the United States. He then sold it to Teddy who in turn sold the beautiful platinum and diamond wonder to a Vampire in San Francisco who planned on proposing to his true love. Speaking of which, I had always thought it would have been nice if one of my single brothers would have taken the ring but since neither one have steady girlfriends…oh well.

I fell out of my thoughts of the amazing ring when the ghost appeared next to me.

“I can tell by the look in your cold hard eyes that you’re thinking of romance.”

I told him the story of the ring. He looked out into the field where the girl ghost was dancing in the wind, the skirts of her long dress flowing behind her. She blew the ghost a kiss. He blew one back.

“She loves you.” I said, looking at the crazy carefree ghost girl with her blazing red curls.

“I never found love when I was alive,” said the ghost. “It was a obcessive ex-lover who caused my death, but I never loved her. She didn’t know how to love. She only knew how to possess.”

“I’m sorry.” I looked at his pale face framed by black hair.

“Don’t be. If I’d lived I would have never have met Mary. Honestly Juliette, unless I was a Vampire like you there would be no way I could have met a girl who was born in 1586, Funny how things work out that way.”

“That’s an interesting take on things.”

“I’m a realist. Of course being a ghost isn’t half as bad as being, well, as being a Vampire.”

“There is nothing wrong with being a Vampire.”

“Sure, if you’re into the whole drinking blood and living at night sort of thing.”

He gave me a rare smile. “I’m glad you’re happy too dear Vampire.”

Then he vanished as the sun went down and the first small bat flew across my back deck.

Good night and sweet dreams…of love and romance for all. 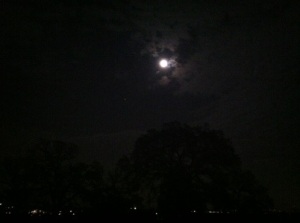 12 thoughts on “Ghost of a Chance for Romance”